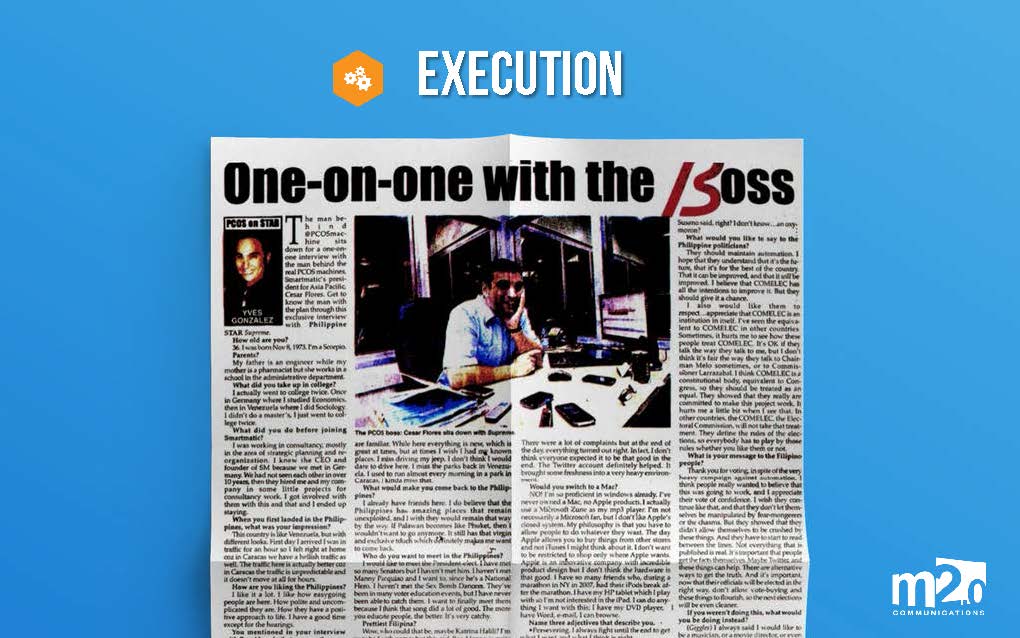 The First Large-scale Automated Elections in the Philippines

In 2009, Smartmatic won its biggest coup. After rigorous technology trials, vendor evaluations, and bidding processes, the Venezuelan multinational company gained the contract to automate the 2010 Philippine elections. With 50.7 million voters, this was the largest election that it had undertaken and the company only had a year to complete it. If successful, the company would have proven its technology and its ability to manage complex, large-scale projects for the entire world to see.

But winning the contract was only the start of Smartmatic’s problems. Election automation was a hot-button issue. “Cheating is the national experience,” lamented Filipino historian, Renato Constantino, “We’ve always had cheating.” In historical textbooks, dictators and political dynasties have retained power through election fraud. But in the same pages, people power threw them out by first protecting the vote. Many martyrs died in defense of the ballot box. For a populace ready to die for democracy, the switch to computerized systems meant that they had to watch out for new ways to cheat.

Despite the rigorous trials that the PCOS machines overcame, journalists and civil society groups remained cognizant of its weaknesses. Voting machines could be hacked as well as the servers and the networks between the two. To make things harder for non-technical election watchdogs, the machines utilized required specialized technical knowledge to maintain and administrate. Suspicions about the machines inevitably transferred to the company that manufactured them.

The fears and suspicions placed not just the election automation project in jeopardy but also Philippine democracy. Democracies depend on the integrity and the societal confidence in the elections.

To save the country’s first nationwide automated elections, Smartmatic needed to extricate itself from the misconceptions and allegations swirling around it.

A Fair Chance in the Court of Public Opinion

More than anything else, Smartmatic wanted to provide a clean and honest automated election to a country that really needed it. With this project, it hoped to create a model that the rest of the world can follow.

To salvage this mission, the Venezuelan company needed to prove the integrity of the PCOS machines. It had to share the security features and inner workings to the government and the public.

Smartmatic itself must be regarded as a fair and reliable provider of the automation technology. It needed to distance itself from government scams that don’t provide the deliverables on the contract. The company had to demonstrate its dedication to the project.

Most importantly, the PCOS maker need the media, the government, and the public on their side. Whatever action it would take could still be questioned if the public didn’t trust them.

To overcome these hurdles, Smartmatic had a wonderful human asset, its President, Cesar Flores. As a Venezuelan, he could empathize with Filipino concerns due to historical and cultural parallels between the two countries. Like the Philippines, Venezuela had its share of election fraud – and horrific traffic too. As a person, he had many things in common with Filipinos, such as a love of cooking and karaoke. Educated in his native country and in Germany, the 36 year old Flores was smart, charming, and has an idealistic side. As the President, people naturally equated his values and personality with the company. If Filipinos felt positively about him, they would transfer those positive feelings to Smartmatic.

But what could he do?

To ensure clean and honest automated elections, Cesar Flores had to win over the various groups who doubted his company and its technology. He needed to calm their misgivings by facing each one with his honest personality.

His face soon became well-known among government officials. He underwent their fire to dispel misconceptions about the PCOS machines’ security. In congressional hearings and other meetings, Flores cooperated with requests to answer questions and produce relevant documentation. Makati City Rep. Teodoro "Teddyboy" Locsin Jr. said he had nothing more to ask of Smartmatic officials who were able to satisfy the committee’s queries, "So far they've been able to answer everything."

Flores led the company to go above and beyond what’s necessary to ensure fair automated elections. When COMELEC lacked time to print the special secure ballots needed because it extended the deadline for filing, Flores provided additional printers to finish the job on time. To address any upcoming problem, Smartmatic recruited, trained and provided approximately 45,000 PCOS technicians and deployed them in all precincts. The company subjected itself to audits by the government and civil society groups to prove its transparency.

To regain the people’s trust, M2.0 reached out to the media, including entertainment writers and talk shows. The agency wanted them to get to know Flores’ hidden side and reveal it to the public. It arranged offbeat interviews that incorporated his charms. In one instance, the team invited journalists to a lunch interview – cooked by Flores himself.

Early on, M2.0 identified beloved ABS-CBN talk show host Boy Abunda as one of the priority targets for media outreach. His award-winning TV show, The Bottomline, invited popular thought leaders to discuss their ideas with Abunda in front of a significant Filipino audience. To ensure the show’s depth, Abunda consulted his guests on the questions and the flow of the discussion. His "showbiz" background allowed controversial topics to be discussed calmly and rationally. This approach resulted in meaningful interactions that enabled Flores to face a representative of the Filipino voter and discuss each other’s points.

To gain the hearts of the Filipinos, the campaign recruited Ms Universe 2008, the Dayana Mendoza, as the company’s Ambassador of Transparency. As a Ms. Universe pageant winner, she had the admiration of a country that regularly sat spellbound during the contest’s live broadcast. Also hailing from Venezuela, she was a perfect representation of the goodwill of the PCOS maker. The lovely Dayana donated laptops to poor communities and shared Smartmatic’s hopes for clean elections.

The country’s first automated election was saved. Cesar Flores earned kudos for defending the integrity of the election machines. His leadership enabled the Venezuelan company to demonstrate their commitment to the elections. Many Filipinos who heard about him liked him, and they even gossiped about his love life. Because of his efforts, people were willing to give his company a chance to prove its worth.

Before the campaign, a Google search about the Smartmatic and Cesar Flores would result in pages of negative press. Afterwards, users could read article after article of Flores’ colorful life. The result was no surprise. In a three-month period, the campaign generated P129M in positive media coverage.

In 2013 and 2016, the Philippines continued to award the Venezuelan company the contract to oversee the automated elections.

Smartmatic considers the Philippines as a worldwide reference for well-run elections. The United Nations, the United States, and the European Union shares the same sentiment and praised the country after the vote.