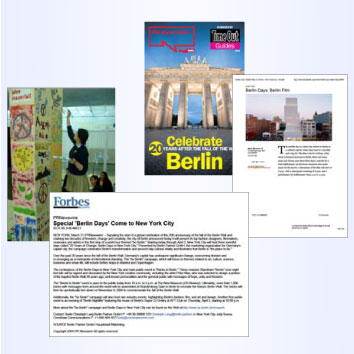 Berlin Partner GmbH is the investment and image marketing organisation for the city of Berlin. To mark the 20th anniversary of the fall of the Berlin Wall in 2009, the city brought its marketing campaign „be Berlin“ overseas.

To showcase Berlin‘s growing prominence as a hot spot for art, culture, science, business and urban life. For three days (March 31 - April 2) the German capital showcased itself at the New Museum of Contemporary Art in Soho. fischerAppelt teamed up with PROI partner Crenshaw Communication to organise and promote the Berlin Days in New York.

fischerAppelt organised three eventful days in NY including a fashion show, a screening of the acclaimed film "Berlin Calling", a panel with director Hannes Stoehr as well as protagonist and DJ Paul Kalkbrenner, Pecha Kucha.

Presentations by artists and designers from NY and Berlin, the public brick signing event "Your message to Berlin“ as well as glamorous after-show parties.

Crenshaw Communications and fischerAppelt realised pre-event PR activities to draw attention to the Berlin Days, including a promotional partnership with TIME OUT New York, live coverage in CBS national morning show (3.4 million viewers) and a press event at the launch of the public “Bricks to Berlin” project.